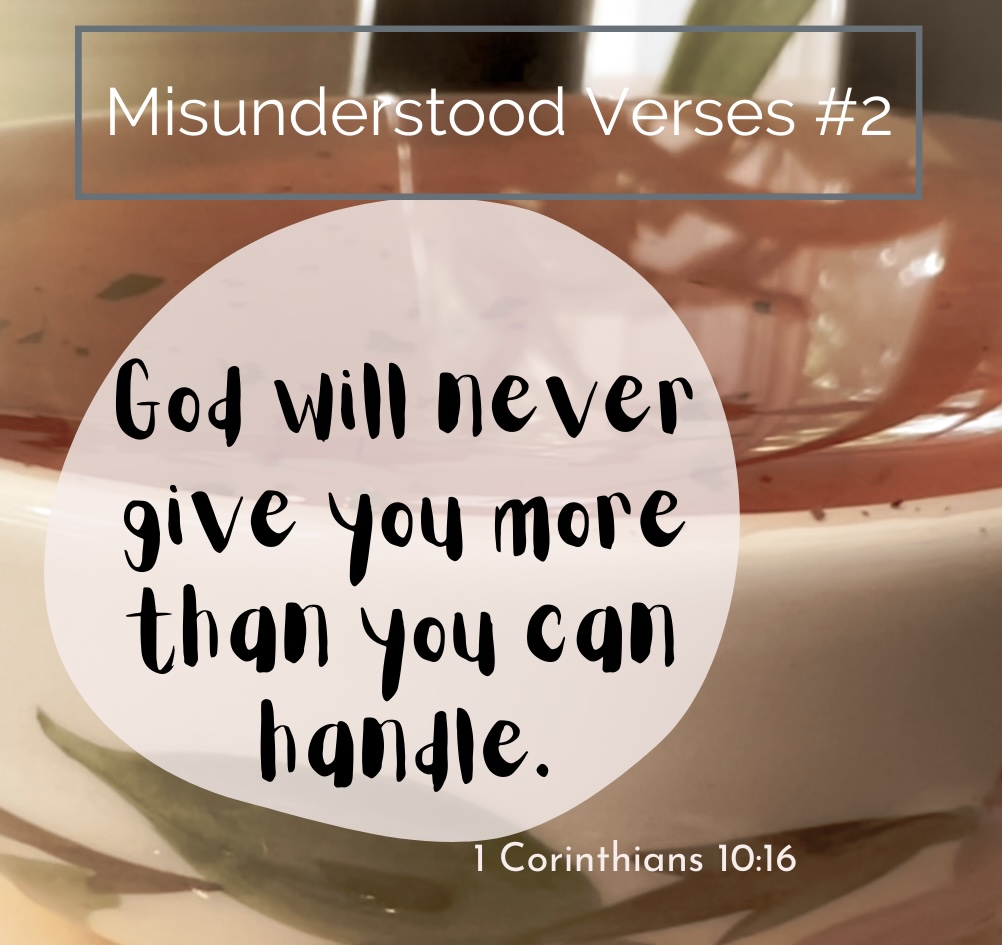 This one is a doozy. It’s common, but it is absolutely not an accurate statement. The verse used to justify this sentiment is 1 Corinthians 10:13

No temptation has overtaken you that is not common to man. God is faithful, and he will not let you be tempted beyond your ability, but with the temptation he will also provide the way of escape, that you may be able to endure it.

Corinth was a powerful city with a culture that valued luxury and worshipped both gods (e.g. Aphrodite, Apollo, and Poseidon) and mythical heroes. Offerings to the gods were accompanied by feasts, festivals, music, and athletics. Women typically ran the homes while men engaged in politics and professional activities. A city with three harbors, Corinth welcomed commercial trade from around the world and sought to please its visitors by offering extravagant opportunities for pleasure. It was so well known for its licentiousness that the name of the city became an adjective meaning identifying people are dissolute, lovers of luxury, and given to licentiousness.

The practices of the society infiltrated the church, and Paul had to write to the church at Corinth at least three times to set their theology straight (one letter is lost, and most scholars believe much of the content of another is repeated in 2 Corinthians). Believers had turned the Eucharist into a feast instead of a somber memorial. They continued to elevate individuals based on social status. And they persisted in the cultural practices of sexual immorality and offering food to city idols.

Given the context of the letter to the church at Corinth, it is evident that the modern take on this verse is misleading. Paul reminded the Corinthians of their history, that the Hebrew people turned to idolatry even though they had just experienced a miraculous exodus from Egyptian enslavement. He cautioned the Corinthians against testing the Lord by doing the same thing, saying that the records of the punishment on the Hebrews was instructional.

The Hebrews of old tried to test God by making idols; the Corinthians seemed to be bent on testing both God and themselves as they teetered on the edges of idolatry. Secular culture is seductive. It is tempting to try and be part of the culture and still remain committed to Christ. But it is a dangerous game. Paul said, “Let anyone who thinks that he stands take heed lest he fall” and then “My beloved, flee from idolatry.” In between those statements is where this misstated verse fits in. Regardless of what some people claim, this verse is not about personal trials at all. It is about temptation. The Corinthians were a worldly group who lived in a busy and wealthy culture. This issue here is the temptation to live in two worlds: the comfortable world of food, wine, and promiscuity and the world of Christian Judaism.

Regardless of what some people claim, this verse is not about personal trials at all. It is about temptation. Like the Corinthians, we too live in a culture that values pleasure over purpose. It is increasingly common to see people who claim to be Christians living extravagant lives filled with luxury and promiscuity, but God is not fooled by false devotion. Everyone wants to be accepted in the world to some degree. Some people seek out public affirmation and use their ministerial positions as celebrity platforms. But if pursuing acceptance and position is what motivates the heart, it is idolatry.

There is always a way of escape: proper understanding and application of God’s word.

As for the helpful intention behind this misleading verse, it too is wrong. God will absolutely allow us to be stretched beyond what we can humanly handle because it drives us to Him. Paul wrote over and over again about human weakness being an opening for the grace of God to fill us and work in us. “My grace is sufficient for you,” Paul recorded the Lord telling him. Paul learned to boast of his weaknesses because he knew the Lord would be glorified by the power of Jesus being with Paul. Peter encouraged his readers who were suffering that Jesus, himself, would restore them (1 Peter 5:10). James wrote that suffering through trials would produce a steadfast faith (James 1:2-4). The psalmists wrote of learning to lean on the Father during difficult times (Psalm 23; 34:19; 119:50,71).

Friends, this life can be hard, even when we do all the “right” things and check all the “right” boxes. But the hope we have is so much greater in Jesus. Yes, we may stretched in unimaginable ways through personal hardships, but we must not lose heart. God is with us, working to make us the people He wants us to be. The Lord promised to never leave nor forsake us. Be encouraged by the knowledge that what we see and endure is temporary, but what we cannot yet see is eternal.