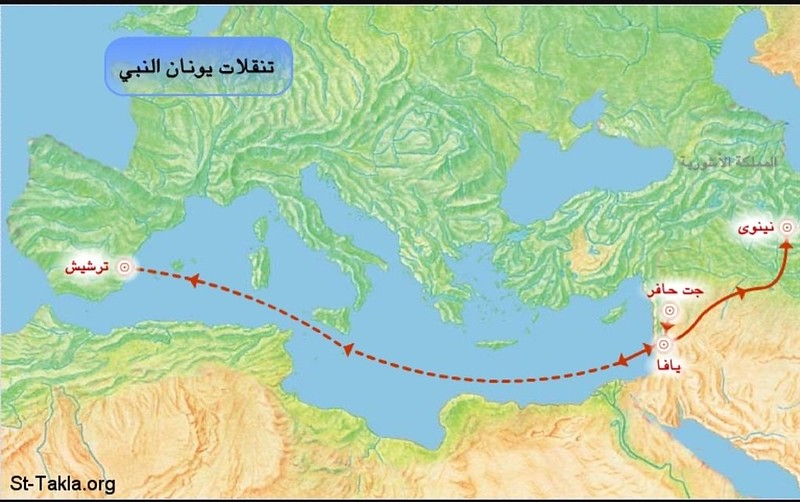 If you want action, Jonah is the story for you. In the first 15 verses Jonah hears from God, runs from God, gets on a boat with sailors who served many gods, sleeps through a storm, gets caught in his disobedience, and gets tossed overboard.

At the same time, God is also active. He calls Jonah to go to Ninevah, watches Jonah run the other way, sends a terrifying storm, causes the lots to fall on Jonah, and reveals himself to the sailors who abandoned their old gods and “feared the Lord exceedingly” (v. 16).

Jonah started near-ish the Mediterranean Sea (the second from right bulls-eye in the map above). Nineveh is the far right bulls-eye. Tarshish is the far left, on the coast of modern Spain. So, the Lord tells Jonah to arise and go. That’s the first time Jonah is told to arise. He arose, but ran the other way, trying to get as far away from God’s call as possible.

The second time Jonah was told to wake up was in the middle of the storm. He was running from God in disobedience AND in the middle of a massive storm and he was asleep??? But, evidently his mind wasn’t worried about the consequences of his actions, and the ship’s captain had to wake him up. “Arise,” he said, “Call out to your god and maybe he will listen.”

Jonah was told TWICE to arise and neither time was he fully compliant. The first time he ran; the second time he played dumb. This is a prophet acting this way; he knew the Scriptures better than most. He knew all the stories of God knowing the hearts of people and not being fooled by them. Still, he somehow thought he could play Survivor with the Almighty: outwit, outplay, outlast. Spoiler alert: he didn’t win.

We might look at Jonah and wonder how or why he could think the way he did. We might even judge his disobedience. But I know how easy it can be to run the other way or play dumb when God leads me to do something I really don’t want to do or am afraid of doing. We all do. We who are believers are just as knowledgeable as Jonah, but we can also act like Jonah until we are caught, reprimanded, and sent on our way. We may not be physically tossed in the ocean, but we feel that terror. The question becomes, what do we do with that feeling?