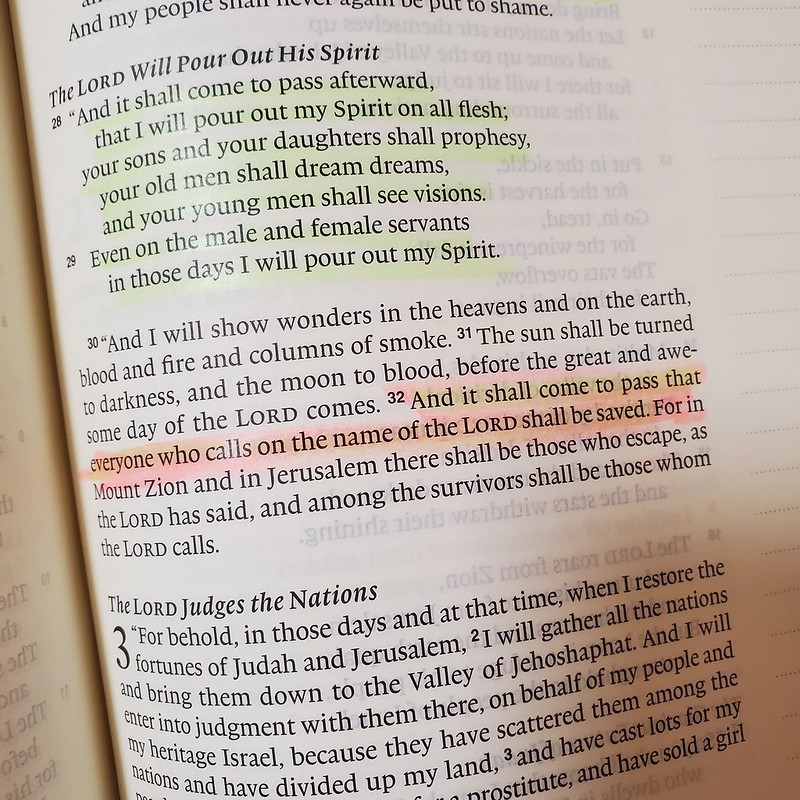 Joel’s word from the Lord opens with a dire warning. I had to look up the context of the book and I learned that it was written after a massive natural disaster: locusts that consumed everything (insightforliving.org). Joel starts by telling the people to remember this disaster, and to prepare for even worse. The nation of Judah (southern part of Israel) was persistent in idolatry and disobedience to the Law. Joel used the natural disaster as a call to repentance before God’s wrath was fully unleashed. “For the day of the Lord is great and very awesome; who can endure it?” (Joel 2:11.) Destruction will be swift and violent and utterly complete as God unleashes His righteous judgment on the nations. The worst natural disaster will not compare to the day of the Lord. “Yet even now” chapter 2 verse 12 begins. God always offers a path of restoration and reconciliation. He calls His people to return to Himself. God is gracious and merciful, slow to anger, and abounding in steadfast love (2:13). In that time, if the people repented and returned, God would stay His hand.

Then Joel jumps to the future, to a time when God will display His power and fully restore His people and His kingdom. Part of that restoration came during Pentecost, when the Spirit of the Lord appeared as tongues of fire (Acts 2). In Jesus, there is hope for all of humanity, for “everyone who calls on the name of the Lord will be saved” ( Joel 2:32; Acts 2:21; Romans 10:13). Part of the prophecy is yet to come: the final and ultimate judgment of evil on this earth. In that day, the Lord will roar from Zion and heavens and earth will quake, but He will be a refuge for His people (Joel 3:16; Revelation 6:1 -7:17). So what is the word of Joel to people in the 21st century? The same as it was in 834 BCE: Wake up! If you think things are bad now, just wait. The people of Judah were devastated by the disaster of the locusts; we may feel devastated by the politics and divisions and injustices around us, seeing no hope for a future.

And yet, even now, God offers a lifeline: For God so loved the world that He gave His only Son that whoever believes in Him should not perish, but have eternal life. For God did not send His Son into the world to condemn the world, but that the world might be saved through him (John 3:16-17).

And there is a lifeline for believers, too: If we confess our sins, He is faithful and just to forgive us our sins and to cleanse us from all unrighteousness (1 John 1:9).

When we look around and feel despair because the world around us is falling apart (because in many ways it is), we know we have a refuge. If we are part of the problem, we have an invitation to run to the Father who loves us so much. In Him we find sanctuary and shelter from the battles of the ages. We know we can abide in Him!